The Nobel Prize is a world-wide phenomenal event that bestows honour and respect to the deserving recipient for making an exception contribution to their field, including Physics, Chemistry, Literature, Peace, Economics and Physiology or Medicine. Of Swedish origins, the event has been in place since 1901 and regardless of any person’s profession in the world, receiving a Nobel Prize award would be the supreme highlight to every single person’s career. Surprisingly so, the popularity of the event is enough to bring in a crowd of punters eager to place wagers on the overall winner. Even amongst the gambling world, Nobel Prize betting is considered one of the more prestigious and premier of gambling events. As lists of top contenders for awards in each specified category are announced, so too are the odds of a likely winner, allowing gamblers to take a punt at their preferred choice and hope that their success in the field is also the gamblers success.

The Nobel Prize awards, the root of the Nobel Prize betting were established by Swedish Chemist Alfred Nobel and take place in Oslo, Norway annually, selecting an international group of candidates for the awards in each category and providing them according to the overall winner of each category, judged on their contribution to their specified field. The premise of the event was created by Alfred Nobel in his last will and testament. Alfred Nobel’s life as a chemist, engineer and inventor was extremely profitable and helped provide the world with numerous inventions that are revered a revolutionary and still used today. He created items such as dynamite and ballistite, a precursor to numerous advanced explosive devices used today by military forces. The amassment of such a large fortune over his lifetime through many of his endeavours made him famous, but somewhat at a cost. The death of his brother, Ludvig, brought about confusion and a premature obituary for Alfred himself. After having read it, he became concerned of his lasting impact on the world and rewrote his will to submit all of his fortune to creating an award event that would honour the intellectual minds of each passing year. 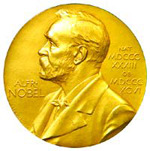 The Nobel Prize awards have been used each year to denote the significant figures in the world today, eager to make a change and help the human race take a positive step forward. To name one, the Nobel Prize in Physics was awarded to Saul Perlmutter, Brian P. Schmidt and Adam G. Riess. Amongst all of the prizes awarded, the Nobel Peace Prize is considered one of the more prestigious and favourable of awards, with previous recipients including the Barack Obama, Kofi Annan and also Martin Luther King Jr.

Every year the event is watched and allows for the opportunity for Nobel Prize betting. Despite the significance of the event, this is not in any way besmirched by gambling on it. The tradition of honouring those who have made a positive contribution to society should always be praised and endorsed, and allowing gambling on the event not only publicises it but also helps to give more audiences a wider perspective.