Bettors will have difficulty picking their favourite out of more than 80 beautiful women competing for the Miss Universe pageant, an annual international pageant. The search is for the most beautiful, smart and talented lady all over the world. Each country will send their candidate to clash with other women from other countries. By clash, it means the battle for the Miss Universe crown, a very beautiful and exquisite crown containing 1,371 gemstones. This year’s venue and date of the pageant is yet to be announced by the Miss Universe Organization, but some countries have already named their candidates. The Miss Universe pageant is one of the most bet on television events and bettors eagerly await this by gluing their faces on the TV. The pageant has to compete in preliminary rounds; this is the stage where bettors would decide who they think is the fairest of them all for the Miss Universe betting, the favorite activity of men during the event, aside from ogling at the beauties. The preliminary round includes judging for the swimsuit, evening gowns and preliminary interviews until the top five has been determined. 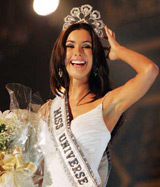 The most favourite and the one who gets most of the odds in favor of her is Miss USA, having won a total of seven titles in the course of the Miss Universe pageant from its birth in 1952 followed by Miss Venezuela and Miss Puerto Rico. Betting would be easier after the original number of candidates is chopped down to fifteen, to ten and then finally to five. There are Miss Universe betting for who will be included in these numbers and the most difficult would be betting in the top 15 since there would be around 80 ladies to choose from. Once the pageant has reached its final five, betting would be easier and of course, more risky. The odds don’t really show exactly or give a clear hint on who will win. Bettors must analyze each candidate thoroughly by their performance.

However, it would probably be difficult for men, the majority of the bettors to critique these women clad in the sexiest of outfits because they would all look stunning. They will have to rely on their gut feeling and the attention garnered by the candidate. Also, the question and answer portion will show how confident and smart the candidate would be, so it won’t hurt to properly watch it for comparison.

The Miss Universe pageant is a great television experience as people around the world see a glimpse of the culture of other countries. This event also gives bookmakers the perfect opportunity for adding the Miss Universe betting in their list of bets as surely it will be on demand. Some of the sites that offer online betting have good deals in store for the bettors so it is advised to carefully pick a site to bet on. The Miss Universe pageant is surely worth seeing and worth betting on as you don’t see dozens of gorgeous ladies strutting their stuff every day. This is definitely one of the best betting opportunities available in the market.